The exhibition begins with an indication of the formal values that liberated textile art from interior design and launched it upon a conquest of space, eliminating the influence of painting. The contributions made by Jean Lurçat and the events organised by the Musée Cantonal des Beaux-Arts in Lausanne led to the introduction of new materials, textures and volumes, which opened up new paths of investigation and which artists such as Aurèlia Muñoz and Josep Grau-Garriga, in the field of tapestry, and Antoni Tàpies, from the viewpoint of the postulates of Informalism, helped to establish. From those achievements the show moves on to more recent aspects, in which the sociocultural mesh and conceptual premises have become the basis for artistic creation. The feminist struggle, the treatment of the body, the definition of identities and social and political protest are some of the themes through which the visitor will travel in the works of Clemencia Labin, Polly Apfelbaum, Joana Vasconcelos, Cosima von Bonin, Kimsooja, Yinka Shonibare, Cristina Lucas, Carolina Caycedo, Laure Prouvost, Annette Messager, Eva Lootz, Ricardo Cotanda and Robert Morris, among others. 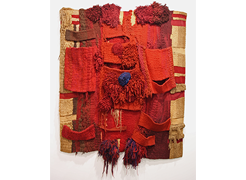