"There is a way of taking photographs without using a shutter, when the flash alone provides just the right amount of light. If you work at nighttime with the shutter wide open, the camera will only record the brief moment of illumination and then no more... Better still, if you set, say, ten flashes to go off at different times, you will get ten distinct images on the same film.
This is the principle of “Les Poussières d’eau”, spindrift: find a secluded place in the country and wait for a moonless night. In front of the camera, place a large bowl full of water with a big stone hanging from a thread tied to a pin over it. Set ten flashes to go off one after the other in the space of a second. When all is ready, in total darkness, open the shutter and pull on the string that will let the stone drop… A switch floats unobtrusively on the water in the bowl. The shock caused by contact with the stone sets off the flash mechanism and for a brief moment you are treated to an unbelievable cascade of light that illuminates each phase of the splash as it evolves. Water fireworks!
This first method gives an image showing only one bowl with ten superimposed positions of splashing water. The system can be perfected by devising a mechanism that will translate the film in the camera with each flash, to produce, instead of just one bowl, ten bowls on the final image and, over each, the splash of water at different stages, like a strip of cinema film. A tribute to Etienne Jules Marey, my master.
The live show was magnificent! In order to recreate on the black and white photos the effect of that burst of emerald spray erupting in the dark, I could find no better solution than to paint my pictures carefully... with water colors of course."

"Even the simplest and most innocent of objects sometimes contains hidden marvels in its apparent ordinariness. Who would have guessed that these faces of Cain and Abel could have been originated from a ray of light focused on a cheap toy made of transparent plexiglas?
With a strong light behind it, the translucid face becomes a primitive mask with dull eyes. Another spotlight, this time from the front, and the plastic eyes take on a look of pure terror. And so we have Cain and Abel. An ON/OFF switch between life and death, worked by the magic of the lighting, the photographic enlargement and the poignancy of a poem by Victor Hugo."

"If you simply let a water drop fall on a glass plate you will not see much. But if you light the glass from underneath and observe its shadow on a sheet of paper, you will be surprised to discover the very visible presence of the water drop, with a myriad of delicate contrasts coming from the slightest variations in thickness of its transparency. I have thus realized that it is possible to convert, translate, mini modulations of reliefs registered in a transparent material, in the light modulations. All I had to do was to put the transparent surface in the enlarger to obtain, by projection, all light information of the reliefs of the surface. I created the first negative completely transparent and yet usable!
For "Asteroids", I poured ransparent resin on some CDs (on the label side, with its mini-relief serigraphy). Once it dried and peeled off the support I got a beautiful crystal footprint that was enough to place in the enlarger....
What you would see appear, when projected, was a wealth of sumptuous information, the sum of the screen-printed relief from the disk and the multiple bubbles, wavelets and accidental faults due to my handling of the resin. All that was necessary thereafter was quite ordinary printing …
The large format of the image (100 x 100 cm), gives it the strange appearance of a disk of ice or planets in the night. This was no doubt the reason for my choice of title for the series, but if you remember that Pythagoras and his contemporaries thought that the planets produced a kind of musical humming as they spun round the Earth, composing a divine symphony, it amuses me to think that with my "Asteroids", "Beethoven" and others, I am proving them right…"

"Around 2009-2010, without quite understanding the reason, my work drifted towards images of the destruction of objects (see "Gueules Cassées", "Le Grand sommeil", les "Scellés", "African Bata"). This time, I entertained myself freezing doll heads on ice to then photograph their faces trapped in frost. I must admit that the concept was exciting, but the results were very disappointing! Ice formation tends to contain air bubbles that cloud everything and quickly made this attempt a failure. The single remain of this adventure is this image where a child's face seems to emerge from flames of ice."

"I had already approached the difficult technique of the Daguerreotype in the 80’s, but I was far too busy then just obtaining an image on that mirror of polished silver to notice anything else. It took another four or five years for me to realize, to my astonishment, that the little silver plate I was working on daily also contained... the reflection of my own face! It is a curious thing that paying attention to one thing makes us blind to another. Illusionists are well aware of this.
I think that the phenomenon was at the origin of the creation of these Gémelles, fifteen years later.
I had chosen to photograph some old mirrors using a large darkroom (100 x 80 cm) to record the image directly on a 1:1 scale, using photographic paper placed at the back of the darkroom. Once revealed, the “mother” image, direct, unique and negative, then served, by contact, to obtain its positive double, to create a symmetric pair, which together formed the complete work. Looking at either image of the pair, it is disturbing to find that it is impossible to decide if we are looking at a positive image or a negative one. Any one area of shadow could indicate the absence of light in a positive or, equally, the presence of light in a negative. During the shooting, the greatest technical difficulty was obtain the image of these mirrors without showing the inevitable reflection of the optical registering the reflecting surface ...How did I do it? Please allow me to bow myself out and leave you with no answer. I shall keep my little secret, but I guarantee it was the fruit of pure reasoning, no computers involved. Contrary to my habit of revealing my tricks, I need to maintain some mystery here. Cruel experience has taught me that people, always so avid to know how things are done, tend to scoff once they have been told, thinking that, after all, you have done no more than a child’s game… How many times have I kicked myself for revealing the rules of the game, exposing myself to such humiliation! Perhaps one day I shall at last heed Voltaire’s paradoxical advice «the secret of being a bore is to tell everything».
Should I confess to the shiver of fear I experienced once all my “Gémelles” were complete and set up in my workshop? Fear that I had meddled with something final. Fear of being unable to go any further and fear of all those mirrors that refuse to reflect my face.
Did I hear you say Narcissus?"

"I understand the process of creation as the unfolding of three successive steps that one might call: Desire, Tool and Translation.
Desire is a "small sensation". It is a premonition of the beauty to come, a need to be fulfilled, a rendezvous with things possible.
The tool is the ferry that takes you from the ethereal idea to the weighty matter and gives it form. It traces the artist’s movement and makes things happen, knowing nothing but realizing all. Once mastered, a tool could be defined as a combination of mechanisms (the word hardware is perfect here) with the peculiarity of producing exactly the same effect, the same trace, if the gesture that guides it is the same. Apart from that, it is not a tool at all but the devil’s device!
The last step, Translation, is the hardest of all. It is the inevitable conflict between the final image and the embryonic idea that originally formed in the artist’s mind. There is often disappointment, always a compromise and rarely a miracle. It can be quite a surprise to see something appear which is not what you were expecting. Some people are willing to take what comes and be satisfied with it, others tear their hair out!
Les Maximiliennes are the fruit of a Desire triggered by a casual meeting with a photograph charged with pathos, taken by François Aubert in the 19th century. The photograph shows the shirt worn by Emperor Maximilian of Austria when he was shot dead by revolutionaries in Mexico. It’s a strong image, chilling hyper reality, where a simple piece of fabric bears all the deadly stains of a shroud.
My tool was the big pinhole camera already used for "Gemelles" in order to photograph as direct monotype at the same scale, old shirts that I had falsely "shot." I put my white linen shirts over a black or wooden boards background, to finally obtain a negative image of the shirt gray on white or gray on the gray boards.
Translation was long and painful: I struggled to give my somewhat ordinary shirts a sense of tension, an emotional charge. Obviously, I had cheated by simulating a tragic event, I am aware of the falseness of my make-believe dramas and Maximilian would be quite right to kick my backside for it!
Today I realize that I was quite simply trying to do the impossible: to make people believe that a photographic icon can become an… Icon."

"Do you know Mr. Josef Sudek? He is a Czech photographer, an absolute wizard! None of his works are of this world. What he shows us is not photography; it’s what existed just before if! By some kind of diabolical power, Sudek shows us directly that initial magic state of the image as it forms, upside down, on the frosted glass of a photographic camera. He is the only photographer who has managed to catch, unchanged, those little ghosts of light that come out of the penumbra and the lens. Hats off!
To you, Mr. Sudek, I raise these glasses, levitating like all images at the back of the camera, before they are fixed with chemicals and become… photographs."

After studying science (Master of Science in Physics 1969) and ten years devoted to painting, Patrick Bailly-Maître-Grand started using the photographic tools since 1980. His works, strictly analogical, black and white silver technique, are characterized with a playful imagination, combined with  complex technologies such as the daguerreotype, the periphotography, the strobophotography, chemical toning, direct monotypes, photograms and to other inventions of his own.

Vanishing the notion of perspective, his images, although very sophisticated in their development, looks simplified as visual proverbs, purified as haikus. 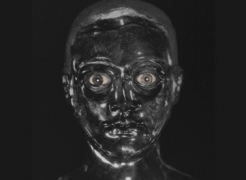