Born in 1949, in Barcelona (Spain).
Lives and works between Collioure (France) and Barcelona.

In 1970 he decided to work as an artist and had his first solo exhibition.

In January of 1995 found in New York, with the artist Steve Pollack, the association “Vodoo Victims”. In 1998, he direct and produce the scenography of stage play “El bell lloc” of Joan Brossa, it was the premiere in Espai Brossa of Barcelona. In this year, he published “El mundo del ritmo” (The rhythm world) in collaboration with Eduardo Mendoza, and he act as the protagonist in the video “Pianito” of Jordi Colomer. In found 1999 “Mic y Mau” with the photographer Luis Ros.

In 2002 he wrote the script of the film “Aquí en la tierra como en el infierno” and in December of 2004 he published the first book of “Garabatos y Zarpazos”, printed by Barcelona University in the collection “Les arts i els artistes”, it was a second edition in 2007. In this same year, he published “Fidelidad total” in collaboration with Ramón de España, it was printed by Raiña Lupa. And in 2008 “Diorama” with text by Eduardo Lago, it was published by Atelier Clot of Paris.

He has received a num­ber of awards and grants, which include the National Fine Arts Award in 2004 (Spain).

In 2007 it was his first retrospective, «No me Digas Nada» (Tell me Nothing) was shown at the MACBA (Museu d’Art Contemporani de Barcelona) and the MNCARS (Museo Nacional Centro de Arte Reina Sofía) in Madrid. For his retrospective he did the film “Mnemocine. Película recordable”, a audiovisual collage constituted for 11 chapters of 26 minutes of duration.

Interview with Carlos Pazos on the occasion of his exhibition at Michel Soskine Inc.
Madrid, September 2011, by hoyesarte.com. 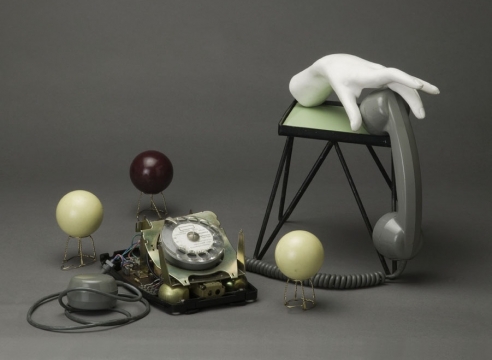